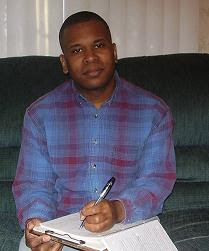 For political pundits, "Super Tuesday" in November 2010 is the date they are watching to see what change will come to America, however, Mississippi native and multi-media personality Cyrus Webb is more interested in Saturday, July 3, 2010. That is the final day of voting in the once-in-a-lifetime opportunity being offered by media mogul Oprah Winfrey. The reward? Five individuals who have the most votes on that date will be finalists in her competition to find the next big tv star. Winfrey has partnered with the celebrated producer of Survivor and The Apprentice to create a competition for her new network,the Oprah Winfrey Network or OWN, and 34-year old Webb believes he has a shot.

"It's not so much about thinking I am better than anyone," says Webb, who has been active in the arts and education-related projects for over a decade. "I just believe that I have been blessed with the ability to help others find and share their voices as well as encourage others to do the same."

In 2003 Webb became the host of his own radio show Conversations with C. A. Webb (now called Conversations LIVE). Since 2003 he has interviewed over 800 guests including some of the biggest names in the arts, entertainment and world of literature and those on the rise, as well as brought attention to issues that matter to everyday individuals. In 2005 Webb followed the radio show with the launch of his local tv show Conversations with C. A. Webb on the ABC affilliate in Mississippi. In 2006 Webb launched what is now the largest co-ed book club in the country: Conversations Book Club. The book club covers all genres and has garnered national attention. Webb has also contributed articles and interviews to over a dozen online and print publications including Mississippi's own Clarion Ledger, Jackson Advocate and The Mississippi Link.

When Webb heard about the competition Oprah was hosting, he knew that it was something he had to do. The contest was announced on Friday, May 14, 2010 and by the 19th Webb had submitted his audition video and was asking for votes.

To help Webb in his endeavor to be one of the 5 finalists on Sat. July 3rd, he is rolling out a national campaign with individuals across the country to make sure the word gets out. He has also launched www.themaleoprah.com to allow people a place to learn about him, vote and also do something else: vote for others, too!

"We can't make it in this world alone," Webb explains. "Yes, it is a competition, but I want to help others as they pursue their dreams as well. This is an opportunity for all of us to bring attention to what matters most to us." Because of this, friends of Webb who have entered the competition are also linked on www.themaleoprah.com so visitors can vote for them.

Webb is using social networking sites to get the word out and will also be leading an offline campaign complete with t-shirts and posters to remind people to vote all the way to the deadline. "It's all about consistancy," he says. "It's not about how strong you start. It's the finish that matters."
Posted by Conversations Magazine at 3:52 AM No comments: