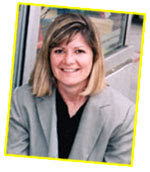 When Roz Bailey was five she danced on the cocktail table at the summer cottage while the adults weren’t looking and quickly learned that a very ordinary movement could be parlayed into extraordinary fiction. Even after enjoying success as a National Bestselling author, Roz still enjoys dancing, cocktails, and summer places. She lives in Oregon with two roommates who also enjoy living beyond their means. Readers can visit her website at www.rozbailey.net, but here you will get a unique glimpse at the woman behind such entertainment novels as RETAIL THERAPY, THE SECRET LIFE OF MRS. CLAUS and now POSTCARDS FROM LAST SUMMER. Our conversation with Bailey reminds you that at the end of the day, girls just wanna have fun.

Roz, I am glad we had this opportunity to talk about your remarkable career. I am always fascinated as to how the writers I interview began their careers. Tell us about when you began writing.
My journey was a little different than most in that I was actually in romance publishing before I began writing, so I got into the business through the back doors. I would have to say that being an editor first and knowing the behind the scenes process was intriguing to me. I couldn't get enough. We were only able to publish so many authors each year, and of course there were certain markets that we targeted at different times of the year so many of the unsolicited manuscripts were read and stored. As part of my duties, I edited Nancy Drew and Hardy Boys novels, so they were tightly scheduled. Once I saw what the books that saw the light of day were those that were wrote to formula and kept to their style, I began to do the same.

Did you grow up in a house of readers?
Oh yes, we were all big readers. I went to the library to get books with mom and sisters all the time. We all were really into books and writing, so I’ve been a closet writer for some time. My siblings and I have always been good friends and I think that has guided me in the subjects I choose to write about.

That’s a good point, Roz, because one thing I noticed about the characters in POSTCARDS FROM LAST SUMMER was that they were not only friends, but almost like family.
I agree. My characters are friends who genuinely like each other, despite their differences and personalities. I enjoy creating subject that have real substance and support each other. They are really kind people.

So what that your goal from the very beginning when you decided to make a career out of writing?
I wasn’t exactly sure what I wanted to write at first. Like I said, I knew that my books needed to follow a particular formula in order to be relevant, but my ultimate goal was to bring a young group together with my books.

POSTCARDS FROM LAST SUMMER follows the lives of three girlfriends as they reconnect in the Hamptons for cold margaritas, hot hookups, and plenty of drama. Some have even called your books as literary versions of Sex in the City. How do you go about deciding who you are going to introduce in your books?
I like to read characters that have some substance to them, so I have made it a point to create characters I along with my readers can sink their teeth into. When I begin a project I like to let my characters grow and evolve.

One of the things that I noticed with POSTCARDS was that even though we got a full picture of the characters, the book ended in such a way that it gave us the idea that we may not have heard the last of them. Was that planned?
I do love my characters, and when I am writing about a particular group of friends I give them my full attention. But after the journey ends with a particular book, I leave the characters there. No sequels.

Okay then, well, if not in a sequel what about a television series?
That would be a fun project. I would love to see the characters brought to life in a show—not really a full-fledge weekly show, but an extension of their literary counterparts.

Since you have established a formula of lasting friendships in your books, what has been the response from your fans.
It is always great to read what my fans have to say or meet them and hear how they related to some of my characters. I hear all the time that they see themselves in my stories. They say things like “How did you know that about me without meeting?” Another thing about my books is that I am known for telling multicultural stories. They are all so different yet that is what makes them so easy to relate to. I have to write what I see in my own life, and that makes me smile, lifts me up

Do you feel any pressure when it comes to each new release?
There is always that pressure you feel no matter how many books you have published. I try not to focus on that. Instead, I just try to make sure that I am keeping them interesting. I have to make sure that I turn the censors off when finding the voice of my characters. It’s all about letting go and allowing them to speak.

What do you think about the fact that people don’t seem to be as into books as you were growing up?
I actually do believe that people are still love reading. It’s just the way they are doing is may be changing. More or reading online now, that’s all. The point is that books are being read and minds are being exposed to new things. I just encourage them to read. There is nothing like getting lost in a book or having a personal meditative time with a book.

Thank you for your time, Roz. What would you like to say to your fans?
I have to say thank you to all the people who have followed me, being along for the ride. It’s been a really good time, and I will continue aiming to entertain, not to bore.
Posted by Conversations Magazine at 10:15 AM