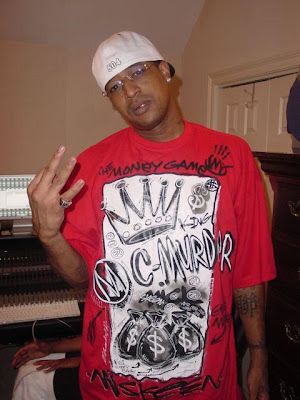 If you would like to see exclusive pictures from C-Murder's first book signing that was held in Louisiana, click here.

When I reached out to Corey Miller (aka C-Murder) earlier this year about giving a live interview with my book club about his blockbuster debut novel DEATH AROUND THE CORNER, I was surprised at how quickly he responded with a Yes and a phone number where he could be reached.

The man who has proved himself to be a prolific force in the hiphop industry seems to transition effortlessly into the literary industry—and with a novel that is sure to grab your attention. DEATH AROUND THE CORNER is a urban blend of Dean Koontz, James Patterson and Danielle Steele. It tells the story of a young man’s rise, fall and the absolution that seems to call to him from the streets.

C, tell us about your life growing up.
I was born in Louisiana, the Calliope projects. Life was tough in the beginning, but I came from a strong family.

And the writing? When did you begin to take an interest in books?
My brother (Master P) started writing in the 80s. We all did well in school, and I got hooked to books early on in my life.

Anyone in particular that you liked to read?
I like all different kinds of authors and books. It really didn’t matter. One of my favorites though was Dean Koontz. I like the way he phrased things and the twists and turns he seemed to have. I had always said if I wsa to ever write a book that I wanted to be like him.

I’m sure people might find that surprising, C, especially since you are known primarily for your music. Where did the book DEATH AROUND THE CORNER come from?
First of all you have to remember that I was behind bars facing a life sentence so I didn’t know what the future held. But I knew one thing: I had to get on my grind. I had to get my hustle on. Plus I like to express myself and put my words out there. Since I couldn’t do it in music, I said let me do it with a book.

While you were locked up was there anything in particular that you read?
I had been doing a lot of studying and reading a lot of books. A lot of people don’t know I was an honor student in school. I read about 500 books since I’ve been locked up. It really didn’t matter what it was. Books took me away from where I was. I told my family to send me whatever they could get. I read all kinds, including the autobiography of Malcolm X and novels Joan Collins. So I felt like it was time for me to get started, to become an author.

How did you start the book?
Whatever I’m doing, I learn quick. Writing Death Around The Corner from prison took me two years. I wrote everything out by hand in notebooks and then mailed them out to be typed up on a computer. It could have been done before that, but sometimes there’s so much happening on the tier and so much going on in your case and your personal life that you just have to chill.

I chose the title Death Around The Corner because every day I was locked up I kept hearing about people getting killed—young dudes mostly. There was just a lot of brothers getting killed. So I said it looks like everybody has to watch their back. It’s serious out there. Death is so close—right around the corner. Everybody can relate to it, from my hood to your hood. Anywhere. So that was the theme of the whole book.

What has been the response from your fans?
It’s been all good. A lot of them write me and tell me that they bought the book initially just because they like my music. After they read it, though, they were actually feeling it.

I think you would agree that you are probably misunderstood, mainly because of the misconceptions about you. Take your name, for instance. How did you become C-Murder?
You're right about people judging me without getting a chance to know me. When I was young and spitting rhymes on the streets, folks used to tell me that I was murdering the tracks I but lyrics to. My name is Corey Miller, so I became known as C-Murder for my lyrical skills. It's just that simple.

With your music career being revived with the new album, do you see more books coming in the future?
Oh, definitely. I have started my own publishing company, Tru Publishing, so look for other books representing the streets from myself and other talented authors.

Thank you again, C, for speaking with us. Is there anything you want to say to your fans?
I thank you for this opportunity. To my fans I just want to say thank you for sticking with me and keep on the lookout for the new heat that I’m bringing.
Posted by Conversations Magazine at 11:40 PM